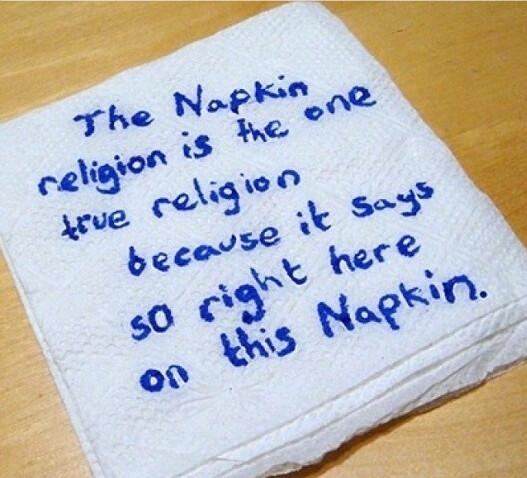 Ha ha.  The Bible doesn’t prove anything about God, an atheist might contend, because it is not self-authenticating.  Whatever it says about God is just something someone wrote down.  Even if its words include the assertion that the words are God-inspired, how do we know that to be true?  Anyone could write anything.  Didn’t Muhammed do some writing, too?  And Joseph Smith?  And myriad others?  We don’t take words as being true just because they’re in writing, or because their writer says the words are true.

Reliability of the Bible

If you believe the Bible, your first instinct might be to argue that the Bible is different.  It has the ring of truth.  Its writers were not self-serving.  Many early followers went to their deaths rather than deny the truth of Jesus’ deity.  The old testament was the result of unusually scrupulous care in making copies – it was an act of worship.  Copies of the new testament are authenticated better by far than any other ancient document that we routinely accept as genuine. See, e.g., Geisler and Turek, I Don’t Have Faith Enough to be an Atheist, ch. 9.

And yet, true as those things may be, arguing the reliability of the Bible probably should not be the first reaction. That gets into many details of history and scholarship and man’s ability to record revelation of ultimate truths that are beyond our full understanding in this life.  A better approach might be to look at the truths about God that are available simply to our reason.  Here are a few.

Well that’s ultimately what the ancient (pagan) philosophers were saying, when they reasoned that there had to be one initial uncaused-cause to every subsequent contingent event.  That uncaused-cause was not merely the first domino in a long string of dominoes that constitutes the totality of vectors of space and time to this moment.  Instead, as Michael Augros noted, that initial cause is continuous; borne out in every reaction within space and time.  See his Who Designed the Designer.  David Bently Hart developed this idea of existence-as-proof, in his essay on “Being,” in his Experience of God/Being, Consciousness, Bliss.

No materialist has convincingly explained how human consciousness can be a product only of external stimuli and internal neuronal sparks.  The materialist model does not explain the irreducible qualia of subjective, internal, human experience.  One conceptualizes abstractions necessary to bring order to what would otherwise be a chaotic bombardment of sense impressions.  Our consciousness provides a framework within which to receive what presents to our senses.

Our ability to reason requires a logical framework that pre-exists our neuronal “hard-wiring.”  A chemical or electrical event in our brain can occur as a result of physical necessity, such as in response to external stimuli, but not as a result of logical necessity.  There has to be a conceptual structure, or logical syntax, that precedes material causes and effects and enables successive logical inferences.  Abstract thinking precedes experience, it cannot be merely the result of experience.

Consciousness is more than merely passive reception of sense impressions. The mind actively imposes on the perception an idea of what that sensory perception is about.   Consider in this connection Philosophy of Mind, by Edward Feser, especially his chapters on consciousness.

It’s tricky business, bringing up morality in the context of a discussion of the existence of God.  A lot of baggage there, many atheists believe, for Christianity.  But the point is not that belief in God makes one more moral, and that moral behavior is good.  That would be an argument based purely on pragmatism, and not a convincing argument at that.

Rather, one should consider simply the fact of our moral sense.  As with the other sub-topics above, this need have nothing to do with the Bible.  There is obviously a moral law written on our hearts in some way, by some means, and it is the same moral law for all of us.

That’s not to say that there is no disagreement about some moral principles, for example about homosexuality or abortion.  What we ought to see, looking past contemporary debates about specific issues, is that everyone, even those on both sides of issues like those, argues their position from a moral standpoint.  One who is pro-life argues the value of life, and one who is pro-abortion argues that the value of liberty is paramount, but both argue for values of life and liberty, and do so with the presupposition that morality is absolute and universal.

Even in our disagreements about moral issues, we indicate that we all subscribe to belief in an absolute moral law.  That’s why our arguments about moral issues can be heated or uttered with indignation.  That absolute moral law implies a Giver of the law.  No one really believes that we author our own morality.  See Geisler and Turek, I Don’t Have Faith Enough to be an Atheist, ch. 7 (Mother Theresa vs. Hitler).

These are some of the reasons that there must be a God.  Note that none of them require referring to the napkin.

If we conclude from these observations that there has to be a God, then it seems unlikely that He would create so impressively, and then look on that creation passively.  It makes more sense that He would interact with His creation.  We should ask how.

If we take an honest look at ourselves and begin to understand our moral limitations (and the necessary absence of such limitations in the moral law-giver) we may come to see our deep moral need for the Giver of that law.

And then if we come to appreciate the love we find in the world, despite man’s moral depravity, then we might see the inevitability of that ultimate act of love:  God redeeming us to Himself.

And if God did that, would He not also reveal Himself more specially so that we might find the bridge that He has built for us?  We might find the Bible to be consistent with how we have come to understand God, and further, that what the Bible says about the advent of the Christ must be true; even that it had to happen that way.